As we watch celebrities defend their honor and make millions just by typing stuff on Twitter, others discuss whether Twitter is doomed or not, and there’s constant hammering on that. But besides Kanye’s and Oprah’s, other tweets have been particular interesting for founders and VCs over the past week. Paul Graham triggered the discussion, apparently unintentionally:

“Startups: instead of appearing on Shark Tank, spend that energy fixing whatever makes your product so unappealling you think ou need to.”

Then a long thread followed, curated below to make your life easier: 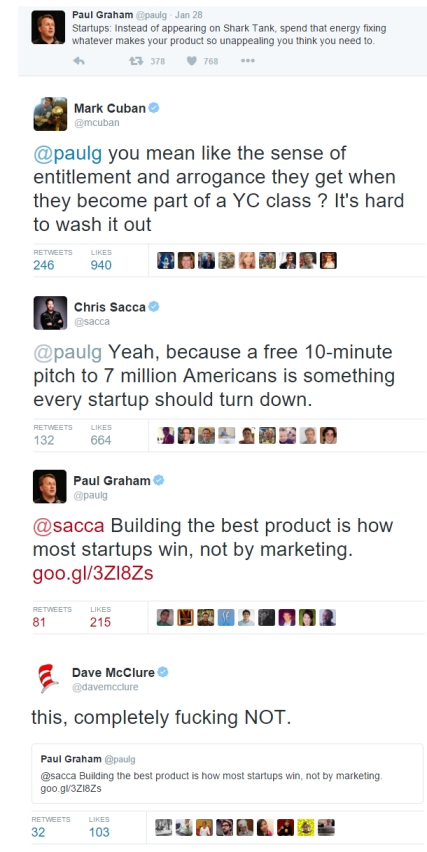 PG’s remark on product and Dave’s polite reply are the tweets that motivated the blog post you now indulge me by reading, because they show that even people who live and breath early-stage venture capital disagree on what are the most fundamental strategies towards growth or doom.

Twitter might be doomed, but that real-time debate might have never happened if it wasn’t out there. So could we assume Paul Graham is right, and getting the product right may be what’s dooming Twitter? Or is Dave right, and it’s a great product that’s not marketed properly? Maybe they’re both right? Or wrong?

Way Beyond the Chasm

“Crossing the Chasm” by Geoffrey Moore became the innovators bible in the 1990s, later followed by “Inside the Tornado”. Both books digress on the same theme: the life cycle of innovation and technology adoption. I’ll speak Startupish for a quick review:

Let’s give Moore a try and throw Facebook and Twitter against that graph. We’ll see they stick in different places: Facebook is definitely approaching the end of Main Street, but it didn’t stop the bowling alley strategy: it has no shame and keeps molding the product here and there to better fit advertisers, small companies, grandpas, and different mobile transfer speeds.

Twitter, on the other hand, chose to be an intelligent and minimal product that covers a major need for real-time information, but still respect you enough to let YOU decide what your timeline shows. It went all in with promoted tweets and other revenue experiments, but is still reluctant to get to full Main Street because of core changes that might have to be done. Maybe it’s just… not made for everyone.

So in the case of Twitter and at the light of the Innovation Chasm framework, Paul Graham may initally seem the one who’s right: but the key issue of it all is a product premise, not a product misfit. That means it’s a strategic problem, not only a product problem. Twitter chose to remain Twitter, and that’s costing them the market. It is a better product in terms of design and user experience, while Facebook sacrifices the product essence in order to maximize the stickness x monetization x audience equation – and the Twitter audience is not as broad.

Twitter is not doomed, because it can still decide to try out various business models without changing the product. We ourselves are all doomed, because Facebook – a massive black-hole of attention – is winning the current race. In respect to its social stream business, Facebook completely tilted towards money: video auto-play, timeline curation, cluttered interface, and destinated the whole user experience to maximize revenue. Twitter, on the other hand, kept its soul. We love it for that, but our grandpas will never get it. And grandpas are (respectfully) cattle for Facebook’s revenue model, since if you’re not paying for it, you ARE the product. Not me – I’m not on Facebook.

Or maybe we should just shrug, facing the helpless and neverending dilemma of great-product / not-enough-revenue.